This paper explains how C programs can be structured by modules.

What modules are
Module interface

Modularization is a method to organize large programs in smaller parts, i.e. the modules. Every module has a well defined interface toward client modules that specifies how "services" provided by this module are made available. Moreover, every module has an implementation part that hides the code and any other private implementation detail the clients modules should not care of. 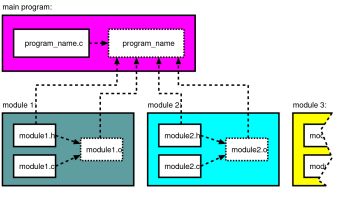 Modularization has several benefits, especially on large and complex programs:

Programming by modules using the C language means splitting every source code into an header file module1.h that specifies how that module talks to the clients, and a corresponding implementation source file module1.c where all the code and the details are hidden. The header contains only declarations of constants, types, global variables and function prototypes that client programs are allowed to see and to use. Every other private item internal to the module must stay inside the code file. We will now describe in detail the general structure of the interface and the implementation files.

Every interface file should start with a brief description of its purpose, author, copyright statement, version and how to check for further updates. All these information are simply C comments or Doxygen DocBlocks.

Proper C declarations must be enclosed between C preprocessor directives that prevent the same declarations from being parsed twice in the same compilation run. Here is the skeleton of our module1.h interface file using Doxygen DocBlocks:

As a general rule, to prevent collisions in the global space of names, every public identifier must start with the name of the module, then an underscore, and then the actual name of the item.

The purpose of the module1_IMPORT and the EXTERN macros is to allow the definition file to be included by client modules AND the implementation of the module, so that global public variables can be declared only once, and the compiler can check if the function prototypes do really match their implementation.

And here is the trick. The implementation file module1.c will define the macro module1_IMPORT just before including its own header file; in this way the EXTERN macro is left empty and all the public variables and public functions will result properly defined: variables will be allocated by the compiler in the text section of the generated object file; function prototypes will be checked against their implementation.

Client modules, instead, do not define the module1_IMPORT macro, then the compiler will see only external variables and external functions the linker will have to resolve.

Constants can be both simple macros or enumerative values. Enumeratives are more suited to define also a new type and are discussed below along the type declarations. Usually constants are simple int or double numbers, but also float and literal strings are allowed.

To enforce the encapsulation of the implementation details, an opaque data type can be declared instead of an explicit data type. Opaque data types are types whose internal details are hidden to the client modules; their actual internal structure is fully declared only in the implementation module, so that client modules cannot access their internal details. This opaque declaration follows this general pattern for the .h and the .c files respectively:

Note that two identifiers are defined: one module_Type is an opaque struct, and the other module_Type is a type derived from this struct type. There is no conflict between these two types because they belong to two different symbol tables inside the C compiler.

The drawback of the opaque types is that clients modules cannot dynamically allocate opaque data structures, nor they can declare arrays or struct fields of such types because their size is known only inside their own implementation; only pointers to such opaque types are allowed:

Since client modules can deal only with pointers to opaque types, the implementation must then provide every allocation and initialization routine that may be required, whose typical name follows the scheme module_type_alloc() and module_type_free() respectively.

It is a good rule to avoid public global variables at all. But if you really need them, here is the recipe to deal with their declaration and initialization. The module1_IMPORT macro is required in order to allocate the variable in the "text" section of the code module. Without this macro every client module would allocate its own copy if the variable, which is not what we expect.

The preprocessor code protects the initial value from being evaluated by client modules, so that the variables are allocated in the code module and here initialized. Client modules will only see an external variable of some type.

Note that global variables are always initialized to zero and pointers are set to NULL, which typically is just the initial safe value programs expect, so there is need to assign an explicit initial value.

All the functions that need to be accessible from client modules must be declared with a prototype. Remember that functions without arguments must have a dummy void formal argument, otherwise the compiler would complain with a quite misleading error message telling the prototype is missing when it looks to be right there!

Macros, constants and types declared inside a code file cannot be exported, as them are implicitly always "private".

Global variables for internal use must have the static keyword in order to make them "private".

Remember also to declare as static all the functions that are private to the code module. The static keyword tells to the compiler that these functions are not available for linking, and then them will not be visible anymore once the code file has been compiled in its own module1.o object file.

Since all the private items are no exported, there is not need to prepend the module name module1_ to their name, as them cannot collide with external items. Private items are still available to the debugger, anyway.

The code file should never need to declare function prototypes, the only exception being recursive functions.

The name of our project will be program_name and its source file is program_name.c. This source is the only one that does not require an header file, and it contains the only public function, main(), that does not need a prototype. The main source includes and initializes all the required modules, and finally terminates them once the program is finished. The general structure of the main program source file is as follows:

Compiling, linking and other common ordinary tasks are usually delegated to a Makefile, the configuration file for the make command. make already has default rules that tell how to build object files *.o out from their source file *.c, but unfortunately it is not aware of our modular structure of the source. To deal with our modules we have to tell to make that also *.h header files have to be added to its dependencies rules. This will require an explicit rule, as we can't rely on the default one. Moreover the main program, the only one that has not an header file, must to be compiled with another rule and it may require also to specify some external library to linking with. Finally, this is the resulting Makefile skeleton:

With this Makefile, compiling the source becomes as simple as issuing the make command alone, no arguments are required. Other tags may also be present, as make clean, make dist and so on. The last tag make depend will be the subject of the next paragraph.

Modules dependent from other modules

The source three we considered till now is very simple, with a main program that depends from several, independent modules. The %.o rule takes care to update every *.o file if any module source gets modified, while the $(BIN) rule re-compiles and re-link the main program if its source or any of the modules gets modified.

But what if some module depends from some other sub-module, either including it in its header or in its code file? And what if modules, besides contributing to the main program, are also mutually dependent? The figure below schematically illustrates a situation in which module1.h/.c requires a sub-module module4.h, and module2 requires module3. 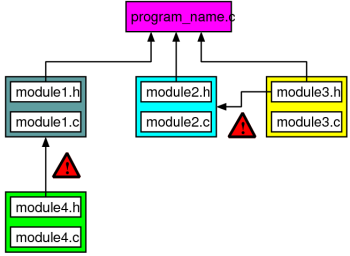 The special tag make depend can do all that boring work for us, as it builds automatically all the dependencies between the source files, and appends them to the Makefile itself. Issuing make depend, in fact, the Makefile gets changed with these new lines:

These rules complete the %.o rule we wrote by hand. The last rule reports the file program_name.o we do not generate, and it is ignored in the context of our Makefile. So, for example, modifying module4.h and issuing the make command, the rule %.o causes the re-compilation of module4.c, the rule module1.o added by makedepend combined with the rule %.o causes the re-compilation of module1.c, and finally the rule $(BIN) produces the updated executable program program_name.

Summarizing, after every change to the layout of the source three it is safe to update the Makefile issuing the command "make depend", and then we can use the command "make" as usual to generate the executable program.

The GNU GCC compiler has a -Wall flag that enables all the possible warning messages. I always use this flag because it helps to write clean code, and it saves from many obscure mistakes that would be difficult to detect otherwise.

You may use the nm command to check if some internal item (variable or function) escaped from our modularization. This command displays all the symbols available in the object file, either available to the linker or to the debugger. For every symbol this command prints also a letter that marks its status and its availability. Public items (i.e. those that the object file make available to the client modules) are marked by an uppercase letter B D T etc. while local symbols have lowercase letters b d t etc.:

We can improve this shell command writing an useful tool that displays all the private identifiers erroneously exported by each code module:

This script accepts a list of .o files and displays all the identifiers exported that are not declared in the corresponding .h file: these symbols can then be readily added to their proper include file.

An abstract of the lastest comments from the visitors of this page follows. Please, use the Comments link above to read all the messages or to add your contribute.

2021-01-19 by Pedro Rondón
Congratulations!
simply, straightforward, good explanation, do you have a resource to learn the best way of how to organize a C project folder structure in a "standard" or "typical" way how good C programmers suggest, I don't know if the correct word is architecture, maybe?[more...]